Golden Era Slot: Rules, How to Play and Winning Strategies

Golden Era Slot: Rules, How to Play and Winning Strategies

Created by Betixon gaming software company, the Golden Era Slot game is one that showcases the thrills, fun, splendors, and moments that happened in the Middle Age China (also known as the Han dynasty age) just like you’d see in the movie posters. This game tells the history of China at the time when the country became prosperous as a result of its booming economy.

This prosperity, in turn, became the beginning of civilization in China, and this led to the technological and scientific advancement of the country.

So, if you are interested in knowing more about the Chinese culture and history from 206 BC to 220 AD; about how China’s economy experienced a boost and growth that changed its history and economy, then you are Welcome To The Golden Era Slot.

This is one of those slots games you’d enjoy playing if you are a fan of Asian games, and although there are other casinos where you can play different slot games, the best casino to enjoy it to the fullest is the Bspin casino.

The Golden Era slot game has 9 playing symbols/characters which include 6 popular slot games playing characters (K, A, 9. 10, J and Q) and 3 special Chinese-themed characters (the golden ingot which is either a yunbao or syncee, the panda with the adorable eyes, and the blue firecrackers.)

To play these slots, all you are doing in spinning. And as you spin, the symbols/characters move through the 5 reels and 3 rolls, and the winning symbol/characters combo as displayed on the paytable determines your payout.

And note that winning on the reel is one-sided and not double-sided, as paying symbols are from left to right only.

You can either play Golden Era slot game for free (using the demo feature with a free spin) without winning, or you can go ahead to spin in the real game by placing your bet using real money in form of Bitcoins with your Bspin account.

With the free demo, you have the opportunity to test run the game free of charge with free spins before you commit with real money, in this case, real bitcoins.

And when you are ready to go the long haul, make sure you have deposited cash (in form of bitcoins) in your Bspin account.

After which you proceed to launch, by punching on the bet button to register the number of bitcoins you are betting with, and also activating the number of paylines that you want to play with.

Then you commence playing by pushing the spin button.

There are also several instructions on how to play Fruits and stars and other slot games in this casino. 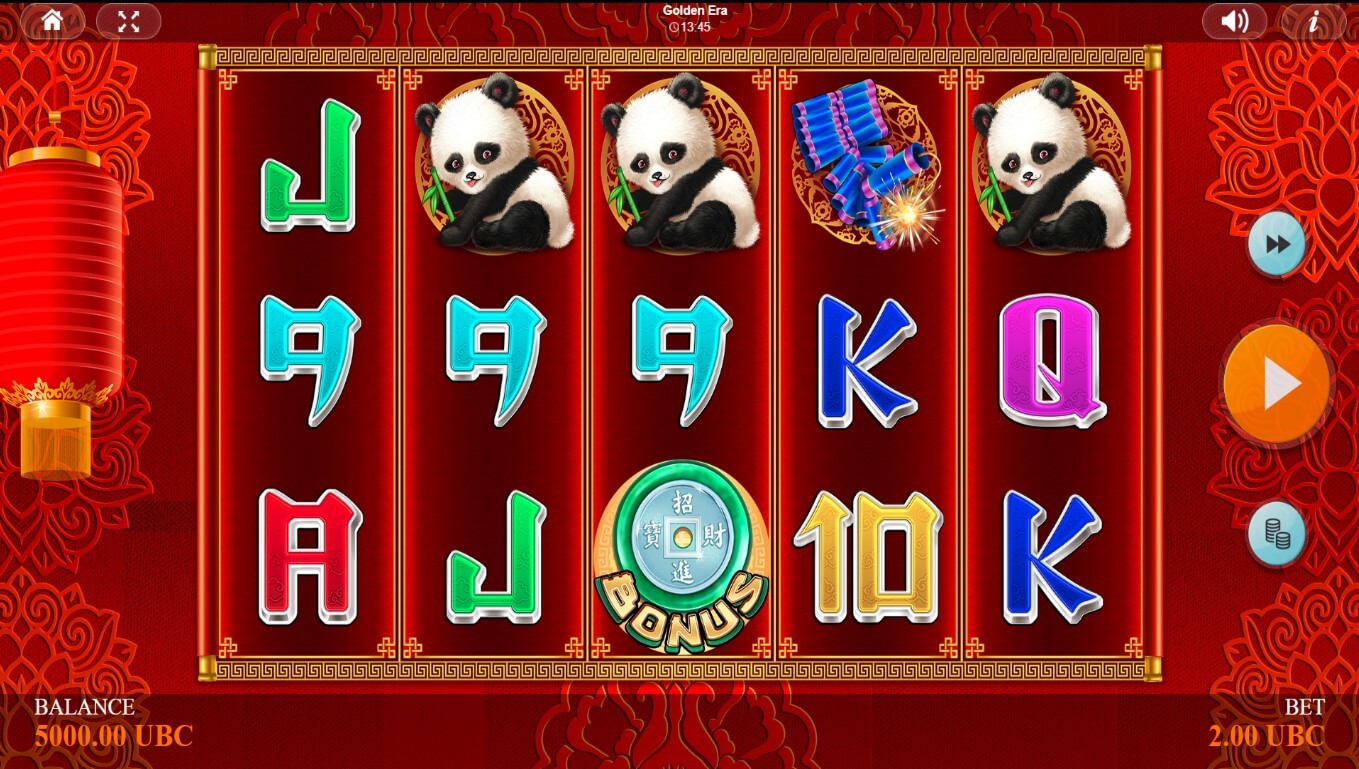 As earlier stated, Golden Era slot is an oriental Asian-themed game, it is not surprising to see that the developers showcased the rich and colorful culture of the Chinese in the theme of this game, as it features a traditional reddish and golden Chinese drapery background and Chinese symbols such as the golden hats, paper lamps, fireworks, and the yunbao (which was an Ancient Chinese currency.)

Another mesmerizing feature in the theme of this game is the reel. This reel is designed to look like a Chinese scroll with a golden frame on the lower and upper edges.

Besides the special Chinese symbols, Golden Era features a medium variance level and  20 winning lines (which allows you to win some real cash while you spin), 5 reels and 3 rolls, and the normal slot machine symbols; A. K, Q, J, 10 and 9 +.

While the normal slot symbols (A, Q, K, 10, 9, and J) are low paying symbols), the fireworks and syncee or yunbao are high paying symbols, and the wild symbol is the highest paying symbol of all.

The Wild feature is a feature that you can substitute for all the other playing characters in the game. Also, it can earn you amazing prizes when it drifts along with the reels multiple times in gameplay.

It can drift and land on the numbers 2,3,4, and 5 on the reels, and when it does, the wild reels symbol will move to the left on each spin hereby earning you bigger wins.

Another feature of this game is the bet multiplier Jackpot which is worth 500X your bet. And you can earn this by matching five Chinese lamps/lanterns symbols on a winning line.

The Autoplay feature is another interesting feature in the Golden Era, as it enables you to spin the reels consecutively without you having to press any buttons manually.

There are not too many bonus features and bonus rounds on this game, as the only two characters that basically earn you bonuses for it are the Scatter and Wild symbols.

The Scatter symbol bonus is earned when your game features 3 Scatter symbols, and when this happens you earn a short round of 5 free spins on the video slot machine, but without any multipliers.

And if you find 3 or more Scatter symbols on the reels, you earn 5 additional rotations or bonus rounds which can be triggered unlimitedly.

Asides those two, you can earn Mini bonus features that have 5 free spins when you find 3 or more Jade coin bonus scattered on the reel.

Also, landing on 3 or more Green Token earns you 5 Free Spins and a 1X multiplier.

Nonetheless, the Bspin bonuses feature allows you to earn a double feature bonus of 100% bonus up to 1,000,000 μBTC and 20 free spins that you can use to play the “Five Star Luxury” game on Bspin.

And when you reload your Bspin account, you earn another double feature bonus of 50% of up to 1,000,000 μBTC and 20 Free spins for the “Five Star Luxury”.

You are only allowed to play with a total stake ranging from 0.20 credits to 20.00 coins.

When there is a malfunction, all your bets and winnings are rendered null and void. This means that you have to make sure your device is functioning properly before spins.

Don’t rush to play with your real cash. Go for the demo mode and have a feel of the game before registering and placing your real bets.

After a big win, don’t continue playing. Take a break and enjoy your winnings before you launch into another round.

But for the first time visitor, this slots game might look like the average Asian-themed casino slot with the casino bonuses you see around, but as it progresses, you would find it exciting and amazing to play as it has all the fun and excitement that other Asian slot games might not have to offer you!!