One of the most popular games at the casino is the Big Six Wheel, also known as the Wheel of Fortune. You’ve probably already heard of the Wheel of Fortune, thanks for the incredibly popular TV show with the same name. Wheel games online are indeed some of the simplest and most popular games around, despite the fact that it’s also one of the games with the highest house edge numbers around. That doesn’t stop players from placing their bet against the odds, of course. After all, with how simple Big Six Wheel is, it’s truly easy to spin until you win. Those are just some of the most popular games we have for our online casino bitcoin players.

If you’re new to casinos or online casinos in general, then you may be asking what a casino wheel game is, to begin with. Well, put simply, the Wheel of Fortune or Big Six Wheel is a game that makes use of a spinning wheel which stands vertically. There are 6 to 8 symbols that are on the wheel, which you can then place your bets on. Each symbol is present on the wheel in different frequencies, from really common to rare. Placing your bets before the spin will pretty much determine how much you get if the wheel stops on any of the symbols that you put a bet on. It’s really that simple!

In today’s article, we will be taking a good look at Big Six Wheel and all of the things that you need to know in order to play this game. If you want to know more about the house edge, the rules, how to wager, and more, read on!

What is the Big Six Wheel?

Big Six Wheel is one of the many casino games that you can play in a casino (in person) or online. The wheel can sometimes be called the Wheel of Fortune or the Money Wheel – it all depends on the casino. This game is built around a big wheel that spins. On the wheel, several markings are available. Markings can either be symbols, letters, numbers, or a combination of any of the above. Sometimes a casino will have letters and then throw in their casino logo, for example. It really all depends on how creative a casino wants to get with their specific version of the money wheel game.

Each of the markings is divided by spokes into equal segments. At the very top of the money, the wheel is a marker or stopper, usually made out of flexible material (like rubber or even leather). This stopper puts friction on the wheel in order to bring the spinning wheel to a stop. The stopper also determines the symbol that will win the player a bet (if they placed a bet on that symbol).

The game is really simple and easy to play, which is why it is incredibly popular in many online casinos. Players simply place their bets on any of the symbols they prefer. They can wager as much or as little as they want before the wheel begins to spin. When the wheel stops, the player will then either win their bet or lose it, depending on the bet or bets that have been placed. Each symbol has different odds, which depend on the house or the casino’s preferences. The odds of winning in this casino game relies mostly on pure, sheer luck. Indeed, unlike many other casino games, the Big Six game doesn’t really require much skill.

Casinos have a built-in advantage in every single game they have. This is called the house edge. Because the Big Six game relies pretty much solely on luck, the house edge is much higher than other luck-based games in the casino. Indeed, the house has a higher chance of winning in this particular game, so as a player your chance of winning is lower. In general, Big Six house edge is higher than other games you’ll find at the casino.

How to Play Big Six Wheel

Learning how to play this game is really quite simple. Knowing the rules will make it easier to understand, though most players generally learn as they go. It’s still quite handy to know the rules by heart, as this will make it easier for you to play in general. Big Six players know the rules by heart so that they don’t run into any problems while they play. Here’s how to play the Big Six Wheel.

You have a starting money pool or balance. From this pool, you can make your bets. The minimum bet is 1.50, but you can wager as much as you’d like – as long as you have the balance to support it of course.

The rules for the Big Six game are simple. The players place their bets on one or more of the six or so possible outcomes. If you mistakenly messed up the amounts you’ve wagered, you can click “Clear Bets” and it will reset the game so you can start making your bets the way you want to. Then, you click spin in order to get the wheel to do its thing. Once it stops, the rule states that you win if you have placed a bet on the symbol the wheel lands on. Know that if you put a bet on multiple symbols, you still only win whatever the rewards are for the symbol that the wheel stops on. Other bets on the other symbols are pretty much forfeited. Understanding the rules makes it easier for players to make their wagers – luckily this game is really easy to get started with! 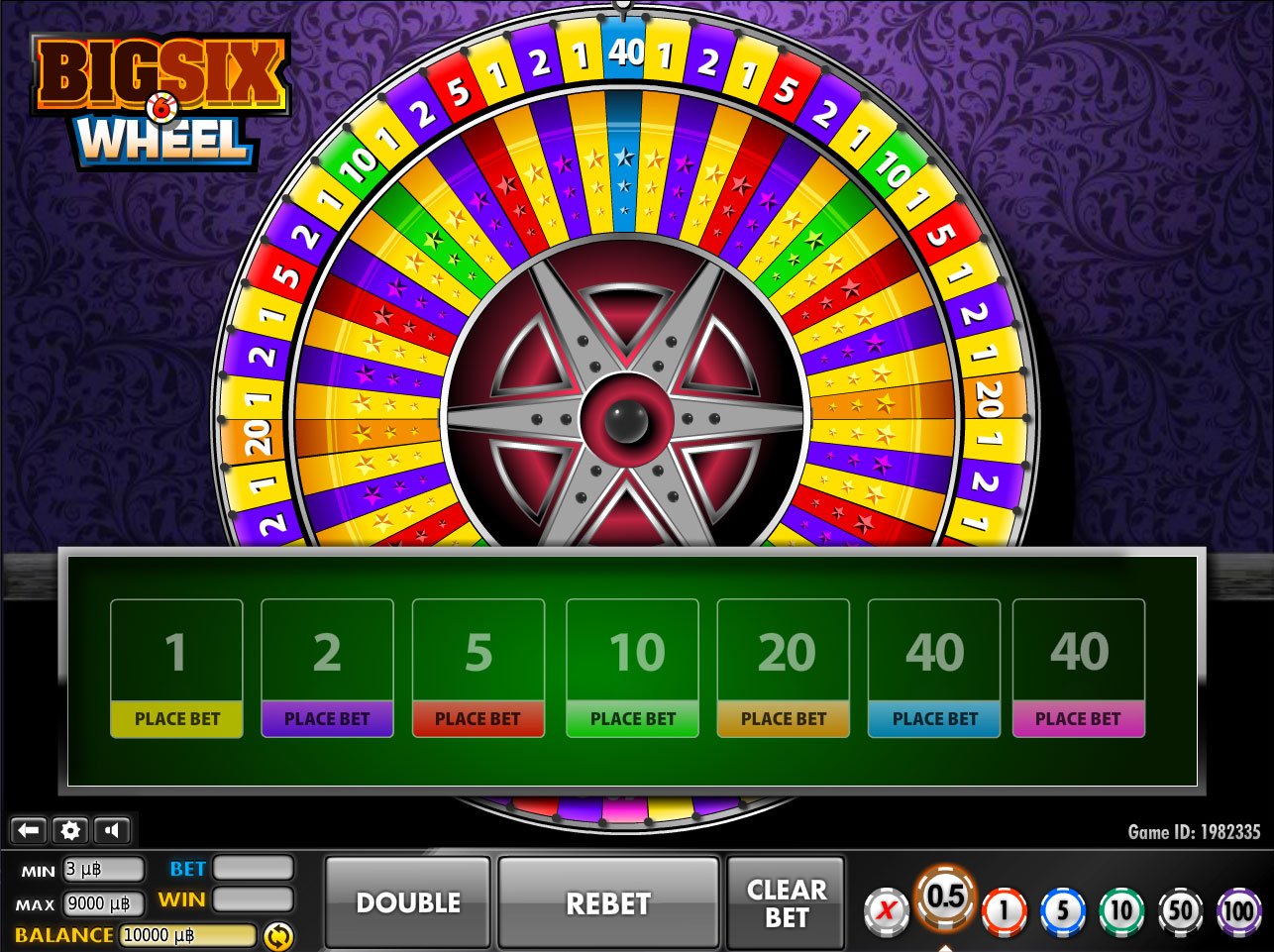 There are different betting options for the Big Six Wheel. In this variation, there are six possible numbers to choose from. You can put your bet on 1, 2, 5, 10, 20, and 40. Each number has its own corresponding color. 40 has two colors to choose from.

You can choose to bet as little as 1.50 to literally as much as you could possibly want, provided you have enough balance. Chips are available in 0.5, 1, 5, 10, 50 and 100 increments. Each bet requires 3 chips of whatever amount you choose.

The payouts of your bets depending on how big or how small you’ve wagered. And of course, the odds of the wheel also contribute to how much you would win. For this version, here are the odds:

As you can see, the higher the odds of you landing on a number, the lower the payouts are. Harder to hit numbers (the ones that appear fewer times on the board) have higher payouts, but also much more risk if you lose. This is where people employ their Big Wheel casino tricks to improve their chances.

Of the many different casino games out there, Big Six is one of the most popular. It’s not hard to learn how to play this game; in fact, it’s one of the easiest games to play. Place a bet, click to spin, wait for the results. It’s literally one of the easiest games to play out there since it requires absolutely 0 skill. Luck is all you need in this game! Some players win big while others make smaller bets in order to be a bit more conservative with their resources. So, which type of player are you?

If Big Wheel doesn’t interest you as much, perhaps you would instead be interested in some slot games online?