Dive right into a game of wonderful chance and skills with Bspin’s Face Up 21. We are the only bitcoin casino out there that can give a thrilling card game that can get you hooked and winning! Ever wonder how this game works? Read on and we’ll break down everything that you need to know to start betting and playing Face Up 21!

Face Up 21 is a kind of Blackjack, that lets the gamer see both deck cards of the croupier. This gives the gamer the chance to compare his round with the croupier’s and determine to stand or go on. A wagering system can surely assist the gamer to take advantage of their winning streak. But there are online gambling sites that do not assure a tactic will work for a gamer. Nor is there assurance that he or she can win, applying the tactic.

Background of Face Up 21

In the 17th century, Blackjack was first seen in the creations of Miguel de Cervantes, the originator of Don Quixote. The main personalities are involved in a casino game that implies to Aces being rated at both 11 or 1 and needs achieving an amount of 21 without losing it. The casino game was later known as the ’21’.

There were also references for blackjack in the following years in France and Spain, where it was called Vingt-et-un (21 in French).

To make the Face Up 21 more well-known in the United States, casino industries provided special cash on a round of the Blackjack (both a club and a spade) and ace of spades. That is how the online casino game has gotten its famous name today, but the ‘black’ regulation does not pertain any longer to a perfect blackjack.

The Russian version of this betting game is known as “Ochko”. The casino game has a Hall of Fame situated at Barona Casino in San Diego, California, wherein top tier expert members of the blackjack society have been distinguished and honored. In 2002, the Hall of Fame was established.

In 1961, Edward O. Thorp, a celebrity in the Blackjack world created the calculation of probability for the casino game. The tactic demonstrated in a casino game in which he triumphed double his fund. This set the basis for the game card tallying blackjack method.

Once the gamble is chosen, click on the deal. Two Face Up 21 cards apiece will be split out face, for the gamer and the croupier.

The player has three choices to meet the croupier’s score – hit, double, or stand. The croupier’s total vs. the gamer’s total can dictate a player’s gaming decisions. If the croupier is far from 21, you can surely pick ‘hit’, however, if his hand is about 21, and the players are far-off from it, the player can still choose for ‘hit’ to exceed the croupier (always remember, that you can’t cross over 21). When the player has chosen ‘hit’, another game card will be given out to the player. What is the score? At average, still below, or higher than the dealer? 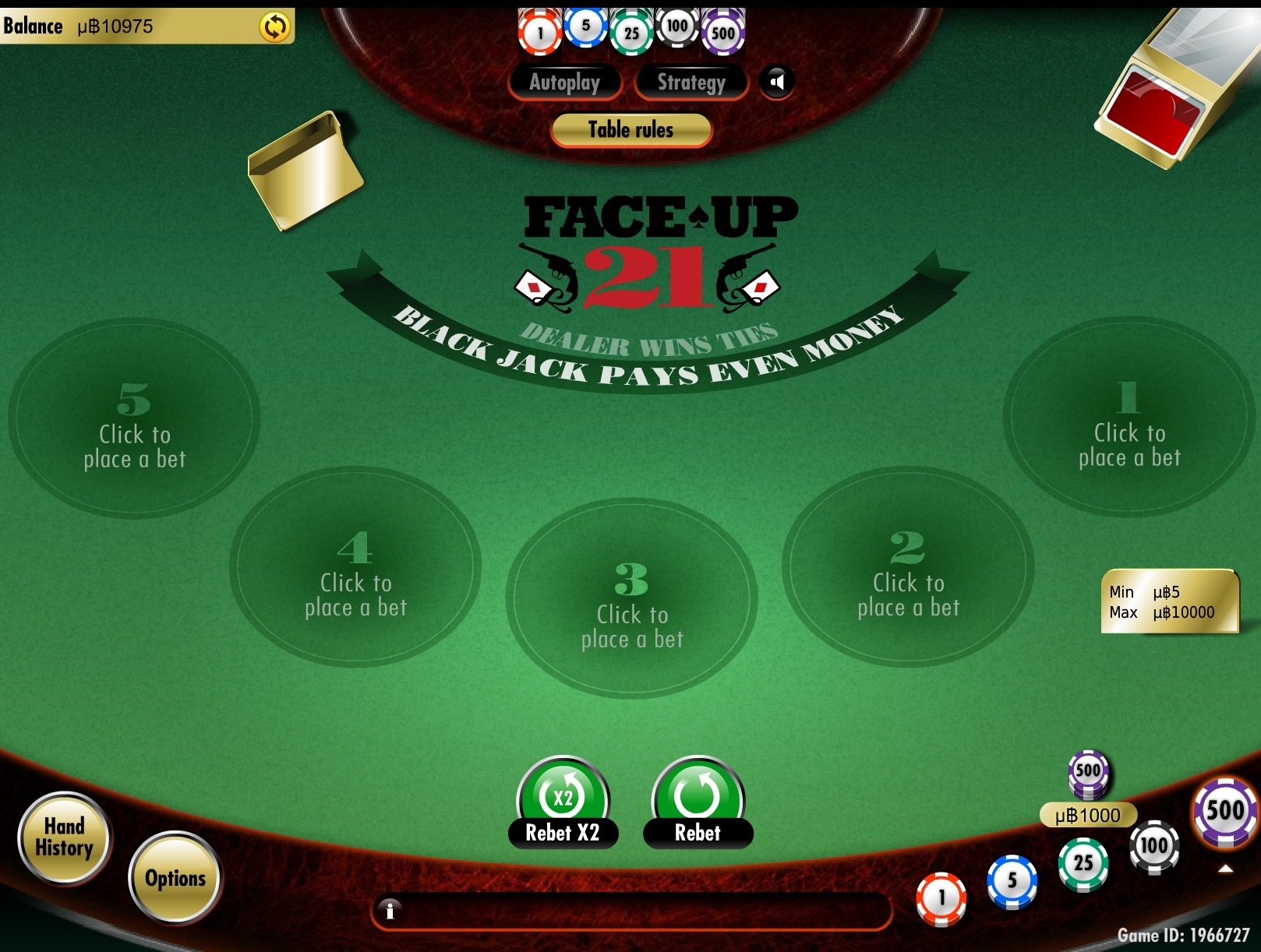 Well, if you have surpassed the croupier, and are somewhat less than 21, you are safe. The Face Up 21 game will wait for the player’s following step. At this stage, you can pick to ‘stand’.

While you have three-game cards to get close to 21, and picked to stay, it is now the croupier’s spin to have a third game card. What’s the gamer’s score now? Fewer or higher than the players or more than21? Congratulations if the gamer has a better amount, he or she can get his refund and he can re-bet the total! The gamer can re-bet to enjoy one more free play.

Scenario 2: Among the gamer’s hand and the croupier’s, if the first pair’s total more than croupier is, and near 21, the gamer would be convinced to ‘stand’, to not surpass 21.

Then, the croupier would get a third, and fourth game card, and unluckily for the gamer, would exceed the overall, and yet below 21. In such a situation, the player loses by his gamble total.

Scenario 3: Among the player round and the croupier’s, the player’s is almost 21, for example, 18, the croupier might be by 12. At 18, the player would not want to gamble of ‘hitting’, hence, he picks to stand. The croupier must tie 2 more game cards, which likely surpass him 21. If the dealer goes bust, the gamer wins!

Scenario 4: The player is presented a round of (5,5) and the croupier takes a round of (10,7). The ‘double’ choice is offered to you, in which your stakes get doubled, you get another game card, upon it immediately stands. When the third game card gives the player a total amount to one that is more than the croupier’s, then the player wins.

Scenario 5: The player could have a blackjack in the first game, with 21 as the perfect score with 2 game cards of 10 and an Ace. You win! The game is all about these combinations and changes that require the player to be conscious of before betting.

Keep in mind, bettors win fair money, for example, you succeed with your wager amount, and the croupiers’. Also, you need to focus on the following aspects: 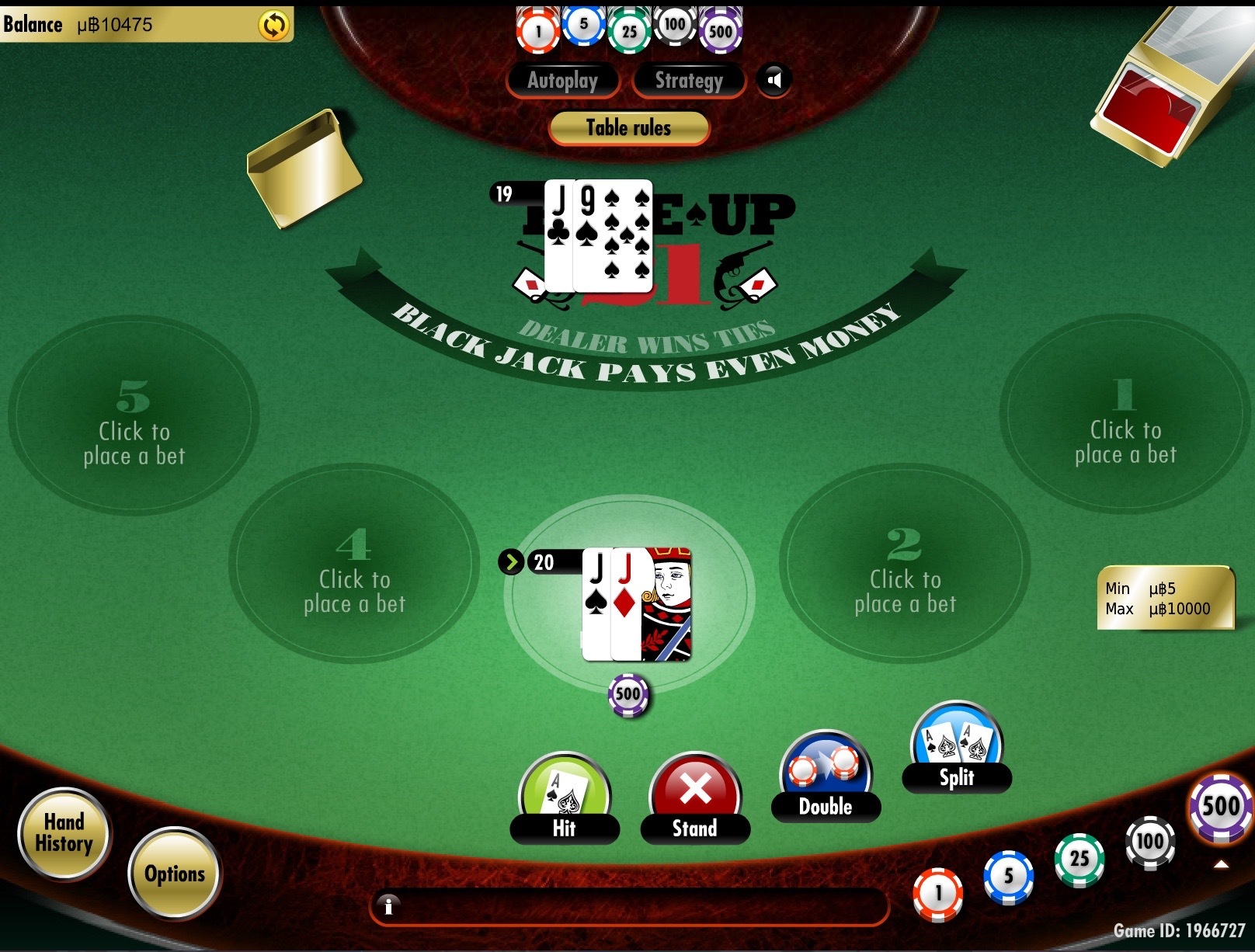 In Face Up 21, a player must keep in mind important guidelines such as:

This system is a positive progression wagering system and it means that a gamer should grow his or her bet each time he wins and change it to his initial bet just in case he loses. The gamer must start by choosing an initial gamble. Every time he or she wins, he mixes his winnings with his initial gamble and uses that as his next gamble. The gamer can continue if he is winning.

If he loses at some point, he should start with his wagering again with his initial stake.

To know more about this betting system, as a gamer you need to look at this. For example, let us say that your fund is $100, and your early stake is $10. The game pays fair cash, and when you win you win, you can get $10 and adds to your fund making it $110. After this betting system, your next wager must be a grouping of your win and your starting gamble which amounts to $20 ($10 prize money + $10 starting gamble). If you succeed, you get $20. The player next gamble must be $30 ($20 jackpots + $10 starting gamble). You can go on pursuing the same style until you choose to stop betting or lose.

This betting system can help the player to win easier. However, this wagering system has its setbacks. If the player keeps growing your gamble money based on the system, at some point your gamble may get to the limit or become too excessive. If you lost at that stage, you may squander a lot of money. To prevent this from happening, choose your “stopping” table limit and stop once you get to that limit. Let us say you choose your stopping limit as five rounds. If you have competed for five rounds, stop. Just stop.

Unlike most of the online casino gambling, it is not a game about luck. Gamers have 4 tools to improve their record versus the dealer, and this needs the application of mathematics and tactics.

Average players at the casino game advise a few suggestions which the players might perhaps practice as well. Their tactics depend on dividing aces and a pair of eights, but never splitting the pairs of 10’s, J’s, K’s, and Q’s. Besides, you can securely hit on 12, 13, 14, 15 and 16 when the dealer has an Ace, 10, J, K, and Q.

Gamers can also apply the double choice on two-card hard totals of 9, 10, and 11 to their edge.

In the game, the lowest stake is $1.00, while $250 is the upper limit. Since the payment odds are 98.5%, the bettor has more chances of winning. Also, remember that when you become a VIP player, your limits settings can be personalized.

Discover more games online like American Roulette or you can play with players around the world with Live Casino – Baccarat. The choice and luck are always yours!