How to Play Minesweeper

How to Play Minesweeper

Minesweeper has been around since the early days of Microsoft. Created by Curt Johnson for IBM’s OS/2 and was ported to Microsoft Windows by Robert Donner as part of the Microsoft Entertainment Pack 1. Since then, the Minesweeper has captured that heart of millions of users.

Minesweeper is considered a cult-classic and has even seen a release to the mobile version of Xbox Live.

Even today, Minesweeper has seen a revival in both its desktop version and mobile version. A gambling company decided that it was good to create a Bitcoin minesweeper, which turned this game into a gambling game.

Minesweeper relies on both luck and skill, there will be times where the player will have to rely on their game-sense to make a decision, but for the most part, learning how to play Minesweeper is similar to learning a language. It requires constant practice and, most of all, a considerable amount of patience.

It might seem intimidating at first, but once you play long enough, you’ll start to recognize patterns. The premise of playing Minesweeper is simple but does surprisingly take a significant amount of time and effort to master.

The goal is to successfully identify all the squares with the mines hidden behind them in the fastest time possible by placing flags down on suspected squares. A match is lost if the player clicks on a square with a mine behind it.

The number of mines varies from game to game and is usually indicated by how many flags a player must place down. However, this can sometimes differ from version to version.

Before starting Minesweeper, the player can choose from three difficulty settings which are, easy, medium, and hard difficulty. The size of the board and the number of mines will depend on which option that player chooses.

features three difficulty levels, easy, intermediate, and expert difficulty. The minimum bet is 1 BTC and a max bet of 1,000 BTC. And an RTP rate of 97.00%. Since the game uses a “provably fair system,” the first square the player opens will never be a mine.

The game currently does not have any specific bonuses. However, you can check out a Bspin bonus that can be used with Minesweeper.

Is it possible to win every game of Minesweeper?

Yes and no. The location of the mines is random; the player can accidentally choose a square with a mine on their second click to gain more information on the board. But once the patterns are learned, it is possible to win the majority of the matches.

Is there a pattern to Minesweeper?

Yes, it is a game of patterns. Minesweeper is partly a game of probability, and like all probability games or equations, a pattern will always emerge. The player need only learn the design on the squares and make the best possible choice.

Can you win Minesweeper without guessing?

Yes, you can win without guessing. However, a player must make one educated guess to win a round of Minesweeper just like you would after you learn how to play Sic Bo. Using their knowledge of the game and a clear understanding of the patterns, the player can lessen these risks and win the match.

What do the numbers mean in Minesweeper?

As discussed above, the numbers represent the number of bombs that are adjacent to a square. For example, on the bottom left of the image, the squares are surrounded by 1’s, 2’s, and 3, this means that the three remaining squares that are unopened have mines in them. 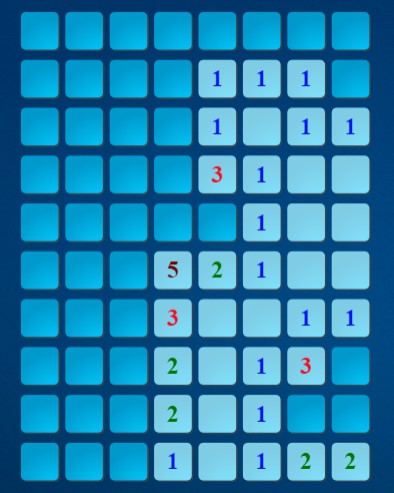 Is Minesweeper a game of luck?

Yes, and no, because it can work out in two ways at the same time. It can play out as a logical game and a game of probability. By identifying a pattern, a player can deduce the location of the mines and increase the likelihood of success.

What is the logic of the Minesweeper game?

Minesweeper is a simple logic-based game that requires time and effort to master. The game offers players both the satisfaction of overcoming a high skill ceiling and the excitement of getting lucky on a guess alone. Minesweeper provides a depth of gameplay that most activities don’t offer.

If you liked this article, check out our how to play Baccarat tutorial!