Pontoon Card Game: A Guide on How To Play and Win

Pontoon Card Game: A Guide on How To Play and Win

If you love gambling and you’re a card person, Pontoon should be your go-to choice. The pontoon card game was initially popular in the United Kingdom and is now gaining traction in the United States. Pontoon is the British version of the famous International 21, the card game, and the American card game Blackjack. It is a five-card version of Blackjack where the objective is to get a cumulative card score of 21 or the highest total without going bust and beating the dealer.

Before we play, there are some essential terms to understand, such as:

If two cards are an ace and a ten, a player can declare a Pontoon by putting them on the table by putting the ten face down and the ace face up on top of it.

You stick when you ask for no more cards. You are satisfied with your current card total. However, you need a card total of 16 or more to hold.

Ask the banker to turn over the next card face up. A player can do this up to three times, or until going bust.

While playing, if your two cards are of equal rank, a player can split them face up on the table by placing another bet, which shall be similar to the initial bet. The banker will then deal two cards face down to each hand. If there is a further match, a player may split again, and the hand goes as specified above.

If the current hand is less than 21, a player can buy a card. Now to buy a card, you need to increase your current bet but not more than twice the original bet. You will receive another face-down card from the banker. You can place this bet up to 3 times. Remember that you can twist after buying a card but not vice versa.

A bust is when a player hand exceeds 21 and looses. 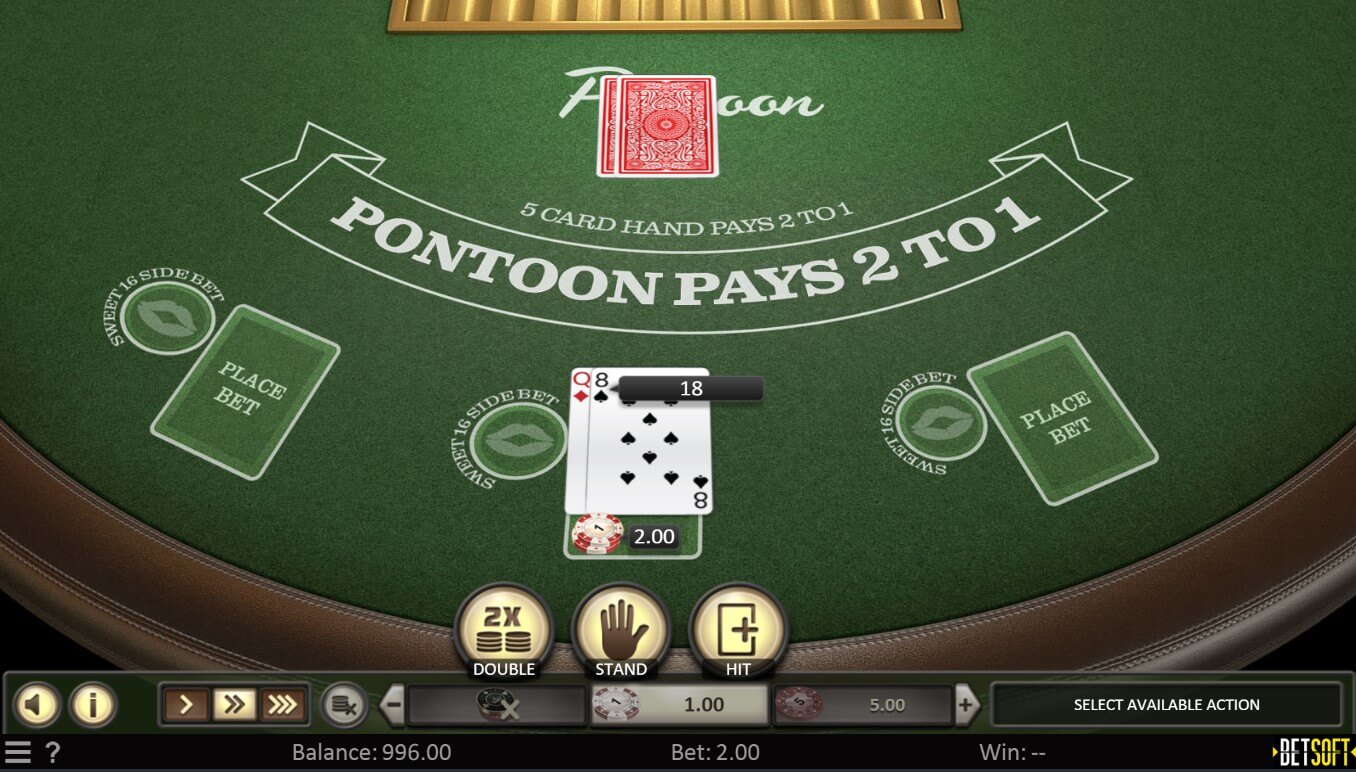 Pontoon is a relatively simple card game. You need 5-8 players for an ideal scenario, but you can play Pontoon with as low as two players. Initially, you need a banker by drawing the highest card. The dealer will deal one card face down to each of the players starting with the extreme left of the dealer.

Players can have a look at their cards and place their bets except for the banker. At the same time, another card is held face down around the table. Before the game begins, minimum and maximum bets need to be mutually agreed between the players and the dealer. As your objective is to get the highest total less than or equal to 21, Pontoon has a similar scoring system to Blackjack.

To win, you shall have a cumulative total of twenty-one or less but higher than all the other players, including the dealer. For instance, in a card 21 game, if you have a 10,5 and 2 with the dealer with 8,2,3,2, you will win. Similarly, if the dealer has an ace, it can get challenging to beat the dealer.

Additionally, you can even play Pontoon with real bitcoins and avail different bonuses and cashback offers such as the Bspin Bonus.

A banker’s play slightly differs from the player. The banker may go bust with a hand over 21. However, on the contrary, if the banker stays under 21 with four or fewer cards. The banker will collect stakes from players with lower hands and payout(an equal amount of their stake) to players with higher hands. A player who declares a Pontoon or has a five-card trick is paid out double by the banker.

Unlike Blackjack and Baccarat, Pontoon enables a variety of betting options for a player. With Pontoon, you have two possible betting scenarios. Either you can split aces or stick to at least a total of 16 to be in the game. Another alternative is Shoot Pontoon, which incorporates the betting mechanism of Shoot as well as other forms of betting.

In the beginning, the banker forms a ‘kitty; bet of an amount of money, which lies between the minimum and maximum bets. After players place the initial bets, starting from the dealer’s left, they can put a shoot bet. This particular bet will be separate from usual bets and be placed between the player and Kitty. Though players are not forced to make a shoot bet, if they do, the sum of all the shoot bets shall be less than the Kitty. However, if the player goes bust, the shoot bet is added to the Kitty.

Shoot bets and standard bets are handled simultaneously except for the Kitty.

Pontoon strategies are relatively easier to learn and perfect than Blackjack, Poker, or any other card games 21 for that matter. If you are interested in playing another game of chance, then perhaps you might want to learn how to play Sic Bo, a strict game of chance. It has strategic considerations such as:

When you have a hard hand with three or four cards, you can:

When you have a soft hand with three or four cards, you can:

If you have a soft total of 21 with three cards, the usual Pontoon recommendation is to double, but if you have already increased. You must stand.

Playing with four cards is different from playing with the option of two, three, or four at the same time. You can:

You can play a paired hands like standard game card 21 two hands except for aces and eights because you need to split ace if you can. Similarly, with eights, you can always break if you have the option or stand if you don’t.

Payouts differ concerning your hands. For instance, a 2 to 1 payout is awarded to the player declaring a Pontoon. It is initially an ace and a ten. It is the most reliable hand in the game, except for the dealer who also has a Pontoon.

Another payout is for a five-card trick, which is also a 2 to 1 payout. You receive the same five-card trick payout even if you have drawn five cards after a split. Other winning hands have even money payouts like Blackjack and the others.

Winning tips can be quickly drawn from its rules. For instance, the banker wins on equal hands despite going bust. The banker can further guess a player’s second card after a twist or a hit. So the essential tip to win big at Pontoon is to get the bank at first.

Other tips vary from circumstances. For instance:

What’s The Best Hand In Pontoon?

Why Is The Card Game Called Pontoon?

Pontoon and its name come from the French Vingt-et-un (21).

Is Blackjack The Same As Pontoon?

The best strategy to win big in Pontoon is perhaps to go for five cards. Because chances of getting an ace and a ten are not that high, but you can always try for a total of 21 with five cards. While you are at it, you might want to learn how to play Baccarat.