Tens or Better: How to Play, Rules and Winning Strategies.

Tens or Better: How to Play, Rules and Winning Strategies. 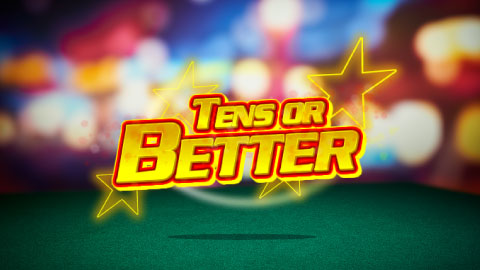 Tens or Better is another variation of Video Poker, just like a Jacks or Better game played in casinos. Video poker has taken the game of Poker off the gambling tables and into the gambling machines, making it more about just you than people you are up against. For some people, this combination of slot machines and poker is very interesting, and the people who find the table poker a bit more intimidating, the video poker becomes their perfect choice for a casino game.
Tens or Better is usually played on a slot machine-like computer. The game itself has very simple rules and gives good payout, making it one of the desired games in every casino. Being able to play without any other concurrent players, this game can also be implemented online, and there are many online platforms that allow players to play online. Some of them allow players to play for free and some do have the actual money involvement.

Tens or better begins when a player pays the initial required bid to the machine of the game. 5 cards are dealt by the computer from the standard virtual deck of playing cards, at random.
Depending on the hand you are holding with the 5 cards, the payout is decided. The player can decide to discard any of the cards or even the complete set of 5 cards. Then the machine re-deals cards to replace the discarded ones. It is the choice of the player to keep or discard certain cards to get a better hand decides the fate of the game and earns the player more or less money based on his decisions.
To increase your chances of winning, or increase the payout you are going to get at the end of the game, you need to know various hands that are possible with the 5 cards that are dealt to you. Having the knowledge of which hands are better than others is also must!

Various Hands of Tens or Better

The hands given here are in the descending order of their ranks, meaning that the hands before will give a better payout than the ones followed by that hand. You should try to get the hands towards the beginning of the list, then all the way down to last ones.

Royal flush occurs when all the five cards belong to the same suit, and have cards from Ace to the Ten, for example, A♠ K♠ Q♠ J♠ 10♠. This is an example of Royal Flush of the Hearts suit, and any royal suits has the highest payout than any other hand in Tens or Better. The suit does not matter at all here, hence A♠ K♠ Q♠ J♠ 10♠ has the same rank as A♥ K♥ Q♥ J♥ 10♥.

Straight flush is when you have five cards of the same suit, and all of them are in a sequence, but it is not a royal flush. An example of this type of hand is J♥ 10♥ 9♥ 8♥ 7♥. Straight has rank lower than that of a royal flush but higher than any other hands in Tens or Better.

Flush is when all cards are of the same suit but not all of them are in sequential order. It is ranked below a full house and above a straight. Flushes or full houses or quads or straight flushes that differ by suits alone are of the same rank. An example can be 10♦ 8♦ 7♦ 6♦ 5♦.

This hand is when all the cards are of sequential rank, not all of same suit. Example of this king is 7♣ 6♠ 5♠ 4♥ 3♥ (a seven-high straight). In any straight, (Straight or a straight flush) the hand is called King-high straight if the highest card in sequence is a king.

Three of a kind occurs when the player has three cards of different suits with same faces and two irrelevant cards in the 5 cards that have been dealt to him. It is ranked lower than a straight but higher than a two-pair.

This hand occurs when out of the five cards in hand, the user has two cards each of two same faces and different suits, and one irrelevant card. For example, K♥ K♠ 9♦ 9♠ J ♦.

Pair of tens is the minimum requirement in this variation of Video poker, if you want to receive any payout in this game.

Rules of the Game

The game begins when the player pays the initial bid via inserting cash into the Tens or Better Machine or swipes a card with preloaded credits. Tens or better is a modified version of 6/5 Jacks or better with change in minimum hand from a pair of jacks to a pair of Tens. In case of use of a card scan, the minimum bid or the bid chosen is deducted from the credits that were preloaded into the card, at the end the player can cash in the remaining credits.
The machine randomly deals out 5 cards from a standard virtual deck of 52 playing cards. You can choose bets before the start of the game. If you choose a 1$ game, you can place bets of 1$, 2$, 3$, 4$ or 5$ and depending on the placed bet, you can get 1X, 2X, 3X, 4X or 5X returns for all hands except the royal flush.
After each hand, you can keep or discard the cards you want or don’t want, depending on the hand you got or the hand you are approaching. You can play a maximum of 100 hands in one go. Payout is made after you decide that it’s enough.

Tips to excel in Tens or better

1. All the strategies that are useful in Jacks or Better also apply to Tens or better. The initial way of thinking should be to get at least a pair of Tens or some hand ranked higher than Tens pair.
2. As the game payout is made only if you have a pair of Tens or better, if you initially get dealt with such a hand, do not discard any card unless you have a better hand.
3. Unless you need only one card to complete a royal flush, you should not break a flush or a straight, as it will not always yield a better payout.
4. Keep a high pair unless you have four cards to a straight flush or a royal flush.
5. You should be inclined towards drawing four cards always when you have only one high card.
6. Draw three cards if you have a pair, and no better hand possible using the cards that you have.
7. Always draw only two cards if you have three of a kind or three cards to a straight flush.
8. When you are four cards to a royal flush, discard the fifth card, even if it gives you a pair or a flush. That way, even with discarding a card that already gives you a hand with some payout, you will probably get something better and hence you should discard the fifth card.
9. If you have reached one of these hands: A royal flush, a double pair, three of a kind or four of a kind, do not break the hand.
10. You should always keep in mind that a Three of a Kind, a Flush, a High Pair and a Straight are all ranked higher than a hand having three cards that are leading up to a Royal Flush. Only stick with a hand with three cards leading to a Royal Flush if you have lower ranked hands like a Low Pair or four to a Flush.
11. Always draw only one card if you have a hand like four of a kind, two pairs, or four cards to a straight or flush.
12. If you have four out of 5 cards for royal flushes, hold them as they are also useful in completing straights or flush hands.
Being a people’s favorite in video poker games, Tens or better, sometimes known as a different style of 6/5 Jacks or Better with Pair of Tens as the minimum hand, can be mastered easily if you implement these easy strategies. These do not require you to remember a long sequence of cards, but involves more common sense to make a better decision.
If you are not sure about how well you can play the Tens or Better, there are some online platforms that allows players to play Tens or Better online for free,